To open a new market for Pathé productions films, after the Pathé-Kok, Charles Pathé think to a home movie projector in 1920: a simple and cheap equipment named "Movie at home". Many patents were registered. Equipment design and construction, with a 9.5mm gauge, were made by Continsouza company.

Continsouza has designed all Pathé-Baby equipments during years 1921-1922: the first projector type A was launched at 1922 Christmas. 2500 units were ready to sell and 50000 units were in command in April 1922. Good advertising and a large film catalog with more than hundred titles was ready to sell or to rent. News "Pathé-Gazette" (2 reels of 10m by month) were also available by subscription from 1925.

The projector have an automatic stopping system for titles to reduce the film footage. The film, 30 feet long, was in a metallic cartridge.

In 1923, Continsouza brought out a "Baby-camera", hand cranked and with a 27feet reversal film cartridge.

So Pathé-Baby system was really an amateur equipment. Possibility to personal self film producing, with limited budget was very attractive. The cine camera (it became motorized in 1926) and projector was extremely easy to use: "end users" public was not disappointed. At this time, 9.5mm gauge was the most popular in Europe. Particularly in Great Britain, in Germany and Austria, many 9.5mm equipments were introduced by severals manufacturers in 1926-28.

The "toy" choice was confirmed by the release of the Pathé KID projector cheaper than the original Pathé Baby.

But the new format 16mm available first in USA announced already a big future competition. Nevertheless Pathé-Baby had also distribution in Japan and in the Middle East. A 16mm Pathescope cinecamera was proposed in the United States and Europe.

In 1931, motor-driven Pathé Lux and Pathé B (1933 - build in UK) finally will correct the crippling defects of Pathé Baby of origin by the presence of sprocket feed and an increased luminous power. The stopping device on title was finally abandoned. 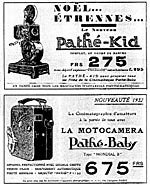 In 1932 the 8mm format on the American market did not have an immediate impact but its world diffusion was sufficiently fast so that it became a real competitor in France and Europe since 1936.

The motion picture had become sound since a long time; Pathé-Baby needs also sound: the sound projector Pathé Vox dedicated to the projection of films with optical track appears in 1937. Unfortunately to place the sound track, there is not an other solution only to occult a small side part of the image.

Right before the second world war the system Pathé Baby, while remaining the prerogative of the families of middle class and easy, had to be an unquestionable success if one takes account of the considerable number of family films at that time and who reached us despite destructions occurred between 1940 and 1944. It is in France, Belgium and Great Britain which it was then relatively very widespread. A little less in Germany where they are especially the formats 16mm and 8mm which was used before the second war.

After the war, the only available material Pathé Baby was the one who dated 1935s as the camera Pathé National. An effort must be made to modernize the range. The arrival on the market of foreign materials 8mm announced the beginning of a serious competition in the field of amateur's cinema.

The rebuilding after war in general did not give to the families capacities to get new cinema equipment for leisure. So some had old camera and projectors saved from destruction. Nevertheless, the esign departments of Pathé succeeded to present in 1947 the projector Pathé Joinville and the Webo cameras.

The projector Pathé Joinville was of a simple robust design but more modern than its predecessors: it was at the origin of the last line of the Pathé projectors declined in various models of which some in competitor formats like the 16 and the 8mm. 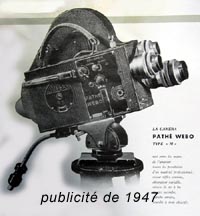 At the same time, two Webo cameras were proposed: Webo A which was only a modernization of Pathé National with a 15m magazine (property of Kodak!) and Webo M. Inspired by the Kodak 16mm type E camera, the Webo M was a technical performance under a relative compactness for the time: reflex viewer, variable obturator, turret with three lens, multispeed.

As a competitor of the H16 Paillard camera, it was more compact, lighter and easier to take in hands but perhaps less robust.

This Webo M quickly became a professional tool and it is undoubtedly the best technical success of Pathé in 9,5mm. It was equipped with accessories adapted to the professionals and was rather quickly declined also in formats 16mm and double 8mm.

In spite of the release of so-called new models Pathé and the doubtful attempts as Pathé Duplex, Pathé equipment was not younger. The simple Webo A (with Kodak 15m magazine) marked no progress with regard to the cameras Pathé preceding the second world war. The most original were Pathé Lido which had the advantage to have reels of 15m. In front of its relative commercial success in the professional world Webo A and M benefited from interesting improvements while remaining mechanical but by being declined in formats 16mm, double 8mm and Super8.

While cheap cameras 8mm were quite endowed with electric engine and often with reflex viewer, the only sophisticated camera Pathé was extremely expensive for a normal household budget. For movie projectors, it was about the same and the choice was very limited. The appearance of Super8 in 1965 which marked a decisive progress in the quality of images offered to the newcomers in family movies the opportunity to equip itself with sophisticated and simple usage materials (reflex viewer, full automatism) for a cost widely lower than in 9,5 market which did not offer modern material. An attempt of automatic 9,5 camera was made well but for a price which reached almost 10 times that of the comparable material in Super8: it was obviously a commercial defeat.

Today this format is almost discontinued but there are always several enthusiasts in USA and in Europe: they are very active in France, in Great-Britain in Nederlands and in Spain.